Košice might not be the capital of Slovakia, but it sure did feel like its most important city. Maybe it was the dramatic arrival as the sun was going down, the initial excitement of entering an accessible city that had plenty going on, on the general fact that it wasn’t Bratislava, but this was a town that felt like a capital city in all but name. Sure, Košice is the capital of Eastern Slovakia, but that isn’t likely to see it come up as an answer on Pointless any time soon, is it?

My brain is not a place where international decisions of any value are made, but I decided that Košice was the new Slovakian capital nonetheless. After a somewhat fitful night’s sleep in an overly warm room, I ventured out into the city to see what the fuss was about, and by ‘fuss’ I mean the fuss that I myself had created in an attempt to put it above Bratislava in the Slovakian pecking order.

Not that there is anything wrong with Bratislava, of course there isn’t. The city the Habsburg folk knew as Pressburg is a pretty excellent place to visit, a modern-day charmer with some excellent pubs and a fine roster of coffee shops, even if they are all run by the same mafia. There is even a cafe named after Ľudovít Štúr, the Slovakian’s Slovakian, and a pub called Čierny Pes that even I need to duck down in order to enter. There is plenty to love in Bratislava.

But there is more to love in Košice. The biggest square in Slovakia for example, a spot I had visited briefly the night before but made a beeline for in the morning. Hlavná is a square in the most liberal sense, I’d probably put it in the boulevard category myself, but this 1,200m long walkway frequently gets top billing in big ‘Slovakian Square’ lists.

And rightly so, because the street is essentially a conveyor belt of awesome sights in Košice. Looking for some excellent coffee? You’ve got Cardio Caffe, just over there on your right. After the best craft beer in town? Žil Verne, right in the middle. Restaurants line both sides, the streets that jut off it are all sorts of cute, and the whole thing revolves around the most impressive church in Slovakia.

St Elizabeth’s Cathedral is just about as monolithic as churches in Slovakia get. It didn’t take long for it to come into view as I walked up Hlavná, although massive Gothic churches that stretch 194 feet into the air aren’t exactly the most subtle on the aesthetics front. My steps became slower as I wandered towards it, blissfully unaware that I had begun to mimic the actions of Dr Alan Grant when he first spies the Brachiosaurs in Jurassic Park, even down to the slow removal of the sunglasses. This was a mistake, as the morning sun was in ‘blazing’ mode. When parents tell you not to stare directly into the sun, they aren’t lying.

My vision, not the best even at 100%, quickly returned and I was able to take in this massive house of God for the first time, or at least for the first proper time. Now, I’m not a religious man, never have been, and I can only imagine the rush of joy that wells up inside the pious when such monumental churches are devoured. I don’t feel it. But what I lack in piety I more than make up in being a slut for aesthetics, and boy oh boy was this a pretty one. I stared up at the Cathedral of St Elizabeth, happy in the knowledge that I was gawping at something truly spectacular.

Work on the church began way back in 1378, although that isn’t where the story really begins. Another church stood here before, a church that was integral to the development of the town, a church that found its way into the first written mention of the town (1230). But fire did a number on the church in the second half of the 14th century, and the decision was made to build a bigger, better church in the place of the previous one. The richest of the rich in the area clubbed together and stumped up the cash, and the green light was given by Pope Boniface IX. All those who helped finance the church found themselves completely forgiven for their sins, another example of the church corruption that Jan Hus was so passionately against, a passion that saw him executed by fire by his own church. The Catholics were pretty harsh on their own, we often forget.

But then everyone who financed the new church in Košice was long dead by the time it was completed. The year was 1508, and the 130 years between beginning and end had seen the usual mix of conflict, tense peace, coups and all the rest take place. Košice had even been attacked by cannons, which must have been rather terrifying, and the church sustained serious damage. It needed to be completed, and one last big effort saw it done by 1508. Of course, fire, war and all the rest continued to smash it about over the next five centuries, but for all intents and purposes 1508 is the year the church was completed. We’ll leave it at that.

I didn’t know this as I was staring up at the thing, trying to work out the best way of getting it all in one photo for easy social media consumption. I eventually gave up, partly because my neck was hurting and partly because the number of people surrounding me had grown exponentially, and I was beginning to feel a little self-conscious of my vague attempt to look like a photographer. I look more like a photographer when I’m nowhere near a camera.

It didn’t really matter. The Church of St Elizabeth was another in the long list of sights that will never look as good in a photo as they do in real life. I took one last look at the cathedral, although the entire idea of a ‘last look’ is silly, especially when you’re going to spend a few days in a town and the cathedral in question is a gigantic thing in the very middle of town. But look it at I did, before leaving it behind for whatever riches Hlavná had in wait for me.

John Bills writes books about Eastern Europe, tomes covering history, travel, booze and the rest. These magical pieces of literary competency can be purchased at this link, so get yourself over there and do the right thing. Pay attention to the discounts. 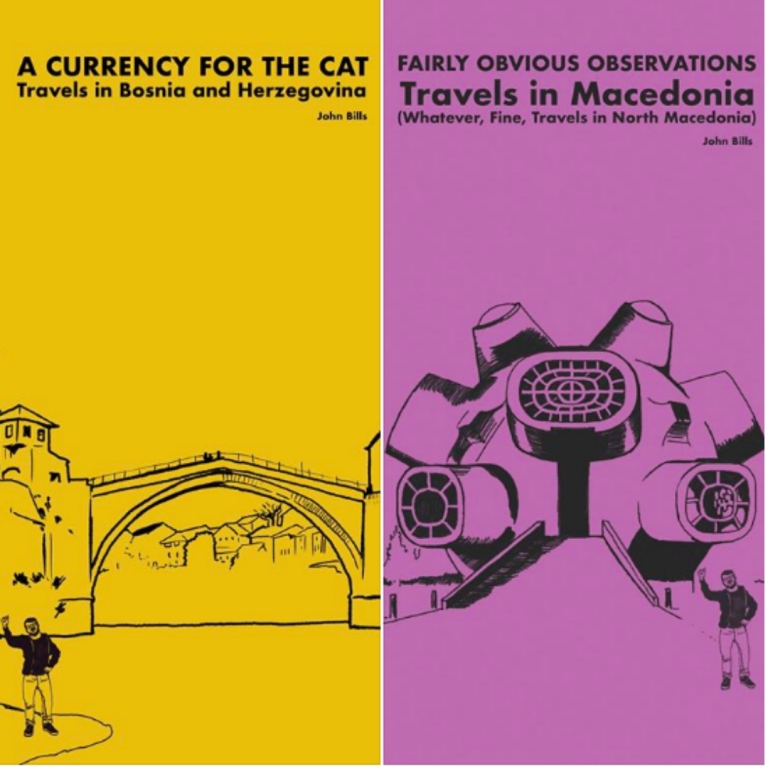 I am #currentlyreading ‘Bosnian Chronicle’ by Ivo Andrić. Why? Well, you never need to give a reason for reading a book, but I’ll go ahead and give you three. 1 — Ivo Andrić was pretty good at this whole ‘writing about Ottoman-era BiH’ thing, so always yes very yes indeed. 2 — The book is set in Travnik, I’m soon heading to Travnik, all Travnik everything. 3 — See points 1 & 2.
Bitola gets the Brews, Booze & Bites treatment this week. All your coffee, pivo and food requirements, under one roof (blog page, same thing). Billsjohn.wordpress.com is the link you need.
Big Jimmy Earthquake, born on this day today. Okay, so he was a Croatian meteorologist by the name of Andrija Mohorovičić, but I’m calling him Big Jimmy Earthquake for the sake of my own sanity. BJE was born on this day back in 1857, in the gorgeous town of Opatija (where Croatian coastal tourism began, so blame Opatija), the son of a blacksmith. Andrija was all about the sea but specialised in physics and mathematics (which I initially typed as methmatics, blimey), two skills that helped him excel in the world of seismology. In fact, ol’ Jimmy is considered as one of the founders of modern seismology. He was the first to establish (based on seismic evidence) that our planet, ol’ Earth, has a discontinuity that separates the crust from the mantle. Serious stuff. It is now called Moho, a shortened version of his somewhat excessive surname.
The man who built Ljubljana. If you’re getting all excited about the architecture in the Slovene capital (and you should), you’re getting all excited about the work of one Jože Plečnik. Saying that, Plečnik did masses of work in Prague as well, which might be why I find the two cities to be so similar. Anyway, what are the big boi’s best bits in Joobles? Križanke, NUK, Tromostvoje, Žale cemetery, Šuštarski most, all the good stuff. One of the all time great Slovenes, to be sure to be sure.
I’m more than happy to place the ‘Best Travel Writer’ crown on the follicle-challenged bonce of Polish champion Ryszard Kapuściński. Pretty much everything he wrote was freakin’ magic, from ‘The Emperor’ to ‘Shah of Shahs’, but it is the longer form works, ‘Travels with Herodotus’ and ‘Imperium’ that really get me going. Holy moly. Magnificent stuff. If you want to get into travel writing, get in to Kapuściński and then give up. A bit like hearing Tool for the first time really. Like. I’d love to be able to do this, but why bother when I won’t be able to do it as well as this dude? Kapuściński died on this day in 2007.
History is littered with famous families, of brothers and sisters who excelled in their fields and made Mama i Papa proud in the process. You’ve got the Harts, the Kardashians, the Warners, the Jacksons, the Dudleys (ahem) and more, the Baldwins, the Kennedys, the Bradys, the Strangs, Bros, the list goes on and on and on. In the world of Albanian education, one name stands proudly above all others — Qiriazi. Or Kyrias, if you’re talking from a Greek perspective. I’m not, so I’m going with Qiriazi. Head to billsjohn.wordpress.com to learn all about them, continuing the education theme. 🇦🇱🇦🇱🇦🇱