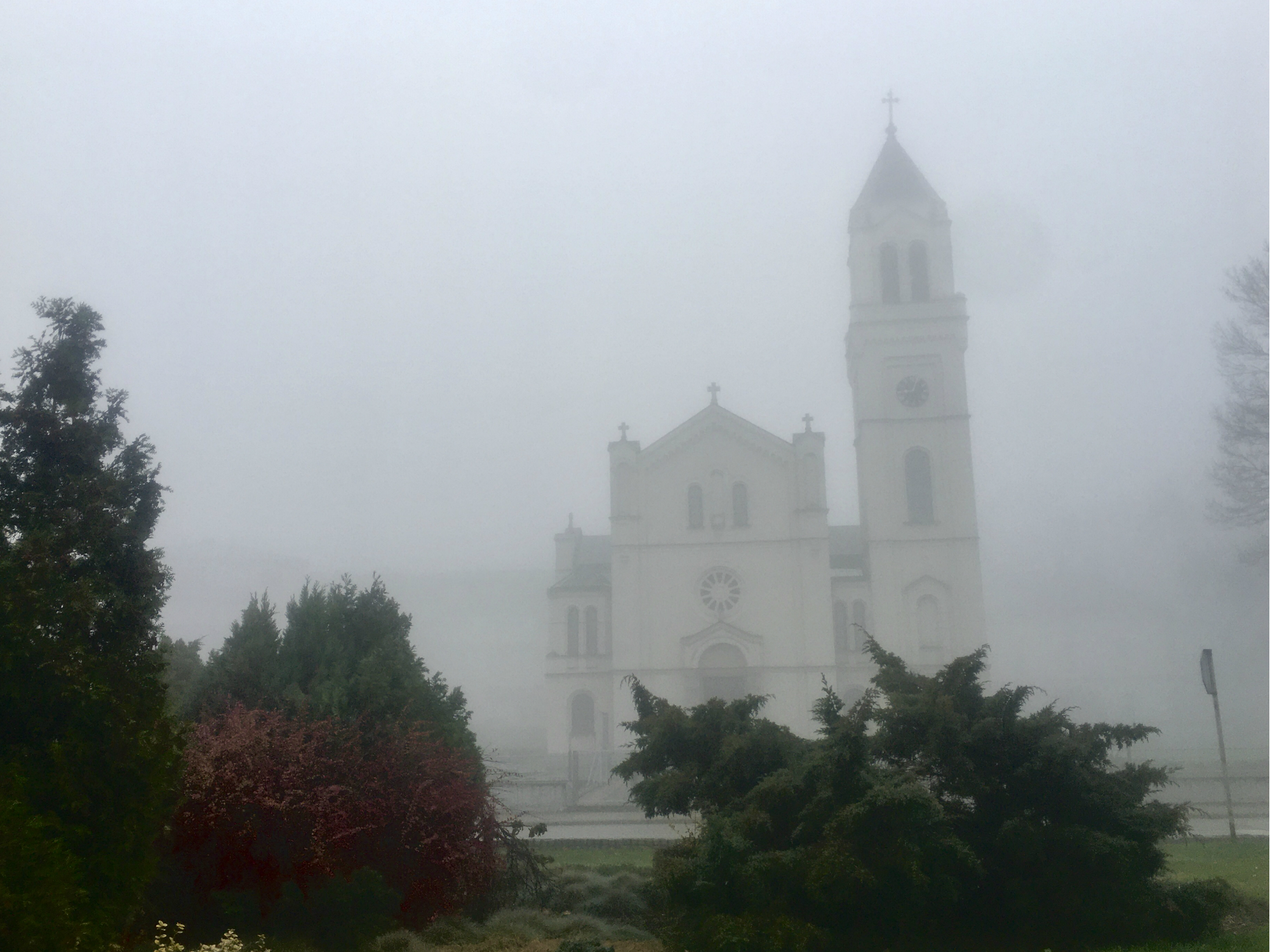 For 18 months, give or take a week or so, I lived in Ljubljana. A beautiful city, although such lazy adjectives don’t even begin to tell the story. Ljubljana is Prague in miniature, stunning Central European architecture’s story enhanced by the ghostly tinges of 20th-century concrete. I have absolutely no problem calling Ljubljana the most beautiful city in Europe.

One thing that people don’t realise about the Slovene capital is how immensely foggy it gets. I lived in the centre of the city, 14 (or was it 15?) floors up, with a view out to the heart of Slovenia on one side and the option of a rooftop view of the city centre on the other. Sounds gorgeous, right? Correct, it was, but for at least a third of the year that morning view was obstructed by dense fog, the splendour of a fairytale city obscured by tiny droplets of water condensed to the point of no return. Fog is the marmite of weather, an absolute nightmare when you’re supposed to go anywhere but surprisingly beautiful when all you have to do is stare at it.

I opened the curtains of my room in the centre of Brčko, a third-floor double room at the far corner of Hotel Jelena, a hotel named after at least 95% of the female Serbian population. There aren’t a huge amount of hotels in the centre of Brčko but I had obviously chosen well. The breakfast was magnificent, and that is all it takes for a hotel to be a wise choice. All of that was irrelevant as I looked out of the window because all I could see was a blanket of grey. Fog. My old friend.

Exploring a city in deep fog isn’t the most pleasant of experiences. This is as true in Barcelona as it was in Brčko. What initially existed as surprises around corners become a little fearful, as you venture deeper into figurative and literal unknown. The glamour of architecture is numbed. The only people on the streets are little more than shadowy figures, shapes shrouded in gloom. It all becomes a little sinister.

I cringe when using the word in Bosnia & Herzegovina, but Brčko was a little sinister that morning. I sloped out the hotel and immediately made for the main square, crossing roads lit only by the metronomic changing of the traffic lights. Red, amber, green, amber, red. I looked back towards the hotel and saw the base of the Serbian War Memorial, dedicated to the Serbians who died during the war. Brčko has three monuments in honour of the war, one for each of the three nations that make up the state. This is somewhat unique in Bosnia & Herzegovina, but there isn’t much more to it. Three ethnicities, three statues.

I walked down towards the border crossing, with Croatia sat on the other side of the Sava river. Border crossings are unpleasant at the best of time. In this weather? No, thank you. Back on the pedestrian street, the Palestine Palace seemed to breathe easier under the mist, free of the pressure of being a beautiful building with no real purpose. This city market usually takes place here, but such things don’t happen on Sundays, and they don’t really happen in the fog.

I walked around for a bit in a fairly aimless fashion, passing the fire station and the low hum of a Sunday morning, before making it to the central park and the main Catholic Church in town. Okay, the only Catholic Church in town. Built in 1861, the Katolička crkva Presvetog Srca Isusov (Catholic Church of the Sacred Heart, kind of) is one of the most impressive buildings in this city, with a bell tower that rivals any other in BiH. I knew this because of previous visits, because all I could see now was the outline of a church, the details lost in the smog.

Architecture suffers greatly in fog. This most celebrated of artistic forms is the beautiful marriage of construction and detail, where raw materials are expertly placed in a way that sings to us, in a way that enhances our everyday lives. Yes, buildings are built for their practical use, but the aesthetic elements are what take the humdrum and make it, well, less humdrum. Without beauty, the claustrophobic concrete of the 20th century might as well do its thing.

But these details cannot cut through dense mist. Even Brčko’s Viječnica, one of the most beautiful buildings in all of Bosnia & Herzegovina, even this iconic spot couldn’t find a way through. The lines remained as striking as ever, but the intricacy had vanished, crushed under the weight of temperature differences and excess moisture. In fog, architecture is where only the destination matters, not the journey. I passed a man selling fruits and vegetables, a sad collection of tomatoes, peppers and onions, a stall lovingly set up despite me being the only individual on the street. You never know, you never know.

How are you supposed to deal with grief? By immersing yourself in memory? Hitting the bottle? Or by packing your bags and heading out to Bosnia & Herzegovina, travelling the length and breadth of the state in the hope of coming to terms with the tragic death of a loved one? John Bills chose a combination of the two, and ‘A Currency for the Cat’ is the story of that trip. From Mostar to Jajce via Sarajevo, Trebinje and more, Bills dives deep into the history of this famous country on a most personal level, facing his biggest fear in the face all the while. It is available in digital form from www.poshlostbooks.com. 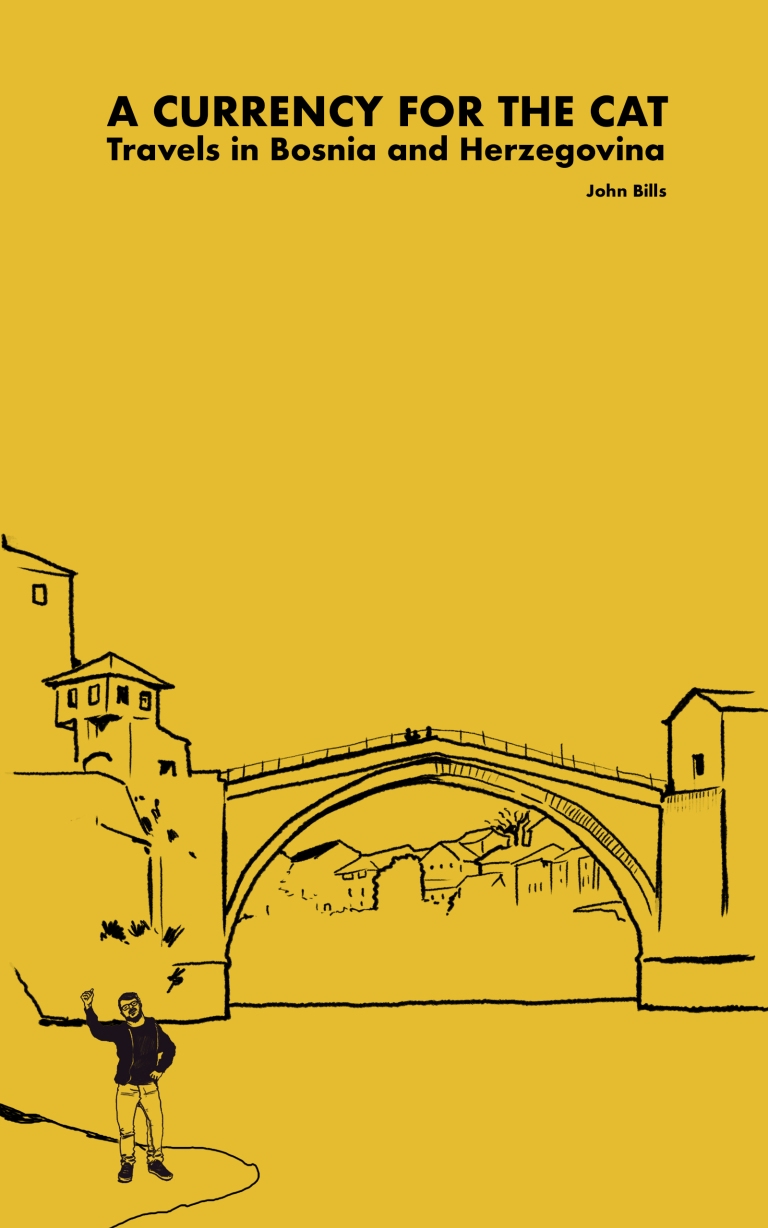